DELL Inspiron 6000 is an Ubuntu workhorse 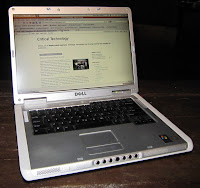 Four years back I purchased a new DELL Studio to replace my old DELL Inspiron 6000. At that time I formatted the drive in the Inspiron and installed Ubuntu 6.10 (Edgy Eft). And now five years later the Inspiron 6000 is more of a workhorse than the new DELL Studio. It is running Ubuntu 10.10 (Maverick Meerkat) and has been used as a development workstation running apache, mysql and php to develop RESTful applications. It has hosted lucene and solr for architectural learning. It has done a whole plethora of technology tasks. It has traveled with me for years and now it is on the road in Thailand used as a rogue for blog posting and uploading images. Its a workhorse and has yet to let me down. Given I have another few weeks on the road I hope I haven't jinxed this with this post... only time will tell.

So why the DELL Inspiron 6000 over taking the DELL Mini 9 or the DELL studio.
I really don't want to hurt this old laptops feelings. It is by far my favorite machine ever! It has written more great code than any other machine I have ever worked on. It has generated more content than any other machine. It has generated the most revenue. It has always worked for me. No longer having this laptop would be a great loss! It would be like losing an old friend.
Posted by Peter at 6:31 AM