Recently, I was re-reading an article written by Michael Geist speaking to the issues around Bill C-32. It gets close to discussing the issue of fair-dealing as it relates to the individuals use of copyright materials. I say close cause it doesn't speak of an individual but of students within educational institutions. This is as close to case law on the independent / self-directed learner within fair-dealing I can find. What stood out for me within the Geist post and embedded ruling were three main themes;

First theme:
The two part test; where first, the dealing needs to fall into one of the following categories to be considered fair;
I believe an independent / self-directed learner is engaged in research and private study, even review. This then takes us to the second part of the test, where the dealing is considered for its fairness via the following six factors, this is how I see these six apply to the independent / self-directed learner;

Second theme:
The use of the table (found on page 10) describing how materials could be copied, and how all parties agreed that as long as the copying was within the first three approaches it should be considered fair-dealing. In my opinion, this is a significant endorsement for the independent / self-directed learner to use educational resources with reckless abandon as it falls within research and private study. I'd strongly suggest you reference the source when using these resources for your learning. Beyond that, go wild, learn with reckless abandon! 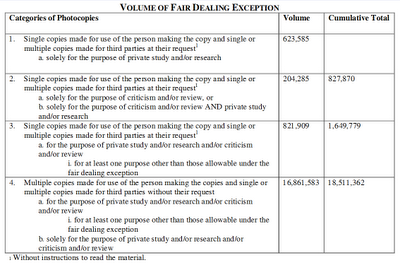 Third theme:
The distinction of education vs. private study was further clarified (on page 19). And fell in favor of the independent / self-directed learner;


The adjective "private" is intended to exclude from fair dealing the commercial use of copyright protected material that has no educational value. I fail to see how the word "private" should be equated with "non-commercial". "Private study" presumably means just that: study by oneself. If Parliament had wished to exclude only commercial exploitation it could have used words to the effect of "non-commercial" or "not for profit". A large and liberal interpretation means that the provisions are given a generous scope. It does not mean that the text of a statute should be given a meaning it cannot ordinarily bear. When students study material with their class as a whole, they engage not in "private" study but perhaps just "study".

This document contains much more description of "private study", and in my opinion further supports the independent / self-directed learner. As this federal court of appeal points out, it depends on the facts of each case. Therefore, we need more fair-dealing rulings, particularly with the independent / self-directed learner.
Posted by Peter at 9:58 PM