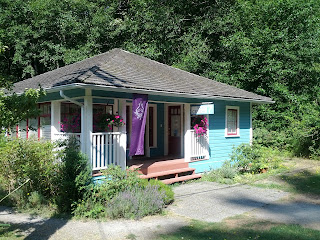 Two main themes to my webmaking over the next six weeks. Citizen based journalism with youth involved with localized food production and the creation of a rock-umentary with my teen daughter and her friends.

Citizen based journalism
The localized food production webmaking event got some local publicity in the island newspaper, which was great to read and increased my excitement about this event. It is likely this event will span three workshops where the first two will take place in the island information centre (shown in photo) and the last one in the community school. The first two sessions are mostly about skills development for journalism. Interview skills, videography, photography, storyboarding, music selection... that kind of stuff. The last session is going to be building all this into a small documentary with the Mozilla Popcorn Maker.

Rock-umentary
My teen daughter and her friends are totally into music, photography, and video production. So I set a challenge for them to create a rock-umentary about Ana Rose's music career so far. And when we are done it will be fully enhanced using Mozilla popcorn maker or maybe just popcorn.js. Looks to be an exciting six weeks...