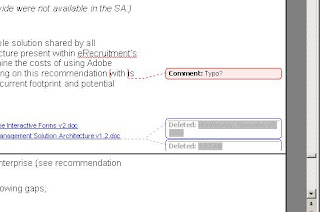 So what happened the other day that sent me over the edge... I was spinning around in the traditional document creation process and I was reviewing some changes and I came across this gem (see image). Somebody took the effort to make the comment that there was a typo. Now I can see the positive side of this in that the document quality was increasing but I couldn't believe the non-collaborative approach. My perspective was if this was in a wiki the typo would have been corrected by the first person to find it and the built-in wiki versioning would have captured the change event. The amount of cognitive cycles saved by only the finder making the change would have held big benefits. For I wouldn't be looking at it and thinking about it, the change would have been made at source of discovery. In my mind this is a micro example of the positive and cascading effects that using Agile and Web 2.0 approaches within architecture could have. Massively collaborate on developing the architecture as needed, let the technology and social media record the history and the tacit knowledge found in the related discussion.
Posted by Peter at 4:19 PM